Chemical Regulation Around the World

Our current approach to the management of chemicals has led to unacceptable impacts to human health and the planet’s environment. International, national, regional and local governments are making efforts to shift to a more comprehensive approach to managing industrial chemicals. Some industries and companies are also taking the lead.

Chemical Regulation in Other Countries

Countries around the world have chemical regulations that require public disclosure on the safety of chemicals and require substitution with a safer alternative if one is available.

In 2007, the European Union’s regulation on chemicals and their safe use, the Registration, Evaluation, Authorisation and Restriction of Chemical substances (REACH) entered into force. REACH shifted the burden of proof of safety of chemicals from government to chemical manufacturers. Under REACH, manufacturers and importers of chemicals are required to gather information on the chemical properties of their substances and submit the information to the European Chemicals Agency (ECHA). This chemical information will be publically available and accessible to consumers and other downstream chemical users. Significantly, REACH calls for the substitution of the most dangerous chemicals when suitable alternatives have been identified.

In June of 2010, the Ministry of Environmental Protection in China adopted the Provisions on Environmental Regulations of New Chemical Substances, replacing a previous regulation from 2003. The 2010 regulations are similar to the EU’s REACH and are known as “China REACH”.

The Canadian Environmental Protection Act (CEPA) that came into force in 1999 required the government to categorize all existing chemicals in Canada and catalog them into an inventory, the Domestic Substances List. Chemicals on the list would then be assessed for their potential to be toxic to either human health or the environment. Canada completed the inventory of approximately 23,000 chemicals in 2006. Canada subsequently developed a Chemicals Management Plan for approximately 200 chemicals, a little more than half (129 chemicals) of which were selected for potential environmental impacts. The 200 high priority chemicals are being assessed in batches of 15 to 30 chemicals, with industry required to provide information on their import, use and manufacture.

A coalition of over 450 organizations, representing labor unions, environmentalists, health professionals, reproductive advocates, businesses, and communities; including the BlueGreen Alliance, have been working to overhaul the 1976 Toxic Substances Control Act for many years.  Among many other reforms, they seek to require businesses to provide transparent information on the health and environmental impacts of their chemicals and to require the U.S. Environmental Protection Agency to take immediate action to reduce public exposure from the most harmful chemicals. Multiple reform measures having been introduced over the course of  several Congresses, the current House has passed a version of reform and the Senate is considering an alternative version.  As these measures move toward reconciliation the coalition, including BGA, will continue its efforts to ensure that reform is in the public interest.

In the continuing absence of meaningful reform of the federal Toxic Substances Control Act, many states are considering legislation focused on toxic chemicals (see map below.) Maine, Washington and California have passed comprehensive chemicals policy bills; Maine and Washington’s bills cover chemicals of concern specifically in children’s products. California’s draft Safer Consumer Product regulations cover all consumer products, and will require companies to assess safer alternatives if their product is identified as containing a chemical of concern. California’s regulations identify workers as a potential population of concern for exposure when considering alternatives. 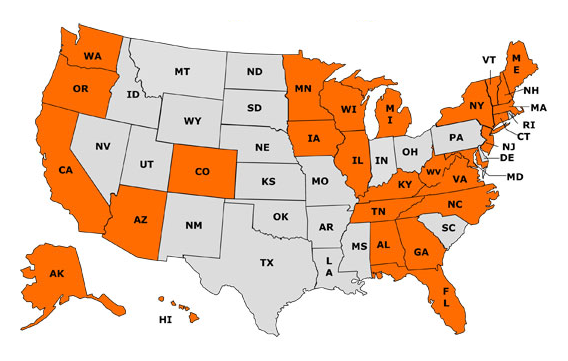 The World Health Organization has convened the Intergovernmental Forum on Chemical Safety (IFCS) as a mechanism to implement chemical safety, which they define as “the prevention of the adverse effects, both short- and long-term, to humans and the environment from the production, storage, transportation, use and disposal of chemicals.” The IFCS contributes to the implementation of other non-binding international agreements, such as the Strategic Approach to International Chemicals Management (SAICM), hosted by the United Nations Environmental Program (UNEP) which was created to create a policy framework to meet the WSSD Generational Goal described above.

The Lowell Institute for Sustainable Production at the University of Massachusetts at Lowell describes comprehensive chemicals policy as “a holistic approach that is integrated and prevention-oriented, ensuring protection of workers, communities, and consumer health while stimulating the development and use of non-hazardous and sustainable chemicals in production systems, materials, and products.”

The 2002 World Summit on Sustainable Development (WSSD) created a Generational Goal that says that nations should "Renew the commitment, aiming to achieve, by 2020, that chemicals are used and produced in ways that lead to the minimization of significant adverse effects on human health and the environment, which says that threats posed by toxic chemicals should be eliminated within one generation."